The BBQ Rubs of Memphis

Just as we have the Egyptians to thank for the name Memphis, we have them to thank for a large part of the proliferation of spices and as a result our unique style of Memphis BBQ rubs. Their needs for exotic herbs and spices, for practice and experimentation in the mummification process, was a large driver to accumulating spices from around the known world at that time. Both Memphis and spices are mentioned in the bible, most notably Joseph being sold into slavery by his brothers to Egyptian spice merchants. Joseph ultimately reunites his family in the land of Goshen just north of Memphis.

The Chinese culture was also prolific in the spice arena, with the spice trade flourishing throughout eastern Asia and the sub-continent by 2000 BCE. There’s a lot of history about specific spices in various locales. Evidence of mortar and pestle grinding of herb and spices dates back to 2600 BCE in India. These mélange of spices were used in the preparation of curry. Curry is actually the dish, but in Western countries it has also expanded to become the spices used, the blend, in the preparation. Curry is often used like a rub when making dry curry dishes.

The first western curry recipe was published in 1747 and talked about crushing spices with a shovel, adding salt and mixing it with the raw meat pieces. Sound familiar, except the shovel part? The French were also well into a simple rub of salt and black pepper on meat before cooking. So the idea of putting the spices directly on the raw meat before cooking has been used for millennia, and in cultures across the planet. 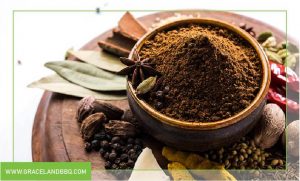 Garam Masala is especially relevant because it uses so many flavors we love in good Memphis rubs but without the heat. It uses what are called warming spices that actually appear in many rub recipes, and are familiar to us; coriander, cumin, black pepper, cloves. Less common in Memphis rubs, but often present in your spice cabinet and Masala are bay leaves, mace and cardamom. Don’t rule them out when you get frisky and start creating your own flavors.

We also have India to thank for refined sugar, again dating back centuries. It was, at times, considered both a drug and a luxury to the ruling class. Production of cane sugar was also heavily protected in India. That ended when the Persians invaded in the 7th century, then the Europeans found out about it during the crusades. This also likely spurred a burgeoning dental care industry.

Molasses is present as sugar is put through the refining process. Natural brown sugar is the dried sugar crystals that have residual molasses still within them. Modern brown sugar is made by re-introducing molasses to the crystals for a more consistent product. As a result molasses can be used in both Memphis style sauce and in the rub for a nice continuity of flavors throughout.

Just as Egypt became the nexus for the early spice trade, Memphis was an early transportation hub in America. This helped with the availability of the spicing that evolved into the incredible rubs that we love. Availability of molasses and resulting sugar components checked off that box. 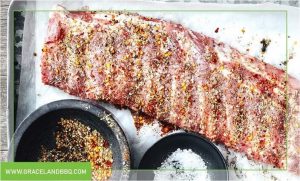 And of course pigs were a fairly easy animal to raise, and still existed in the wild as escaped descendants of the original pigs that De Soto brought during his exploration. Pork rapidly became popular with the Native Americans and was the cause of some early friction as they raided the explorers to get the pigs they craved. It also helps that pork is particularly disposed to taking on flavors from spicing. Readily available meat, spicing components and sugars set the stage for barbecue as a cuisine to explode and become codified as a style in the Memphis locales. Also see our Memphis style pork shoulder tutorial.

Bring on the heat

In the style of other curry forms, great Memphis rubs needs some heat. Beauty is in the eye of the beholder. And heat is in the head of the one eating the food. We all like different levels. Because we are doing dry style barbecue preparation, much of the initial heat will continue through to the cooked product. Unlike moister cooking methods, the heat is only slightly diminished in the dry process.

Yes, we want sugars to sweeten the meat. But they also play a crucial role in balancing out the heat of your spicing. As a result, you can be a little heavier handed on the hot side knowing that the flavors will remain and some of the heat will be offset by the sweetness. Lastly, it is worth introducing some herbal components to round out the full flavor goal of a good rub.

This is a bold rub that delivers many layers of flavor, all working toward the goal of enhancing the smoke and meat flavors. 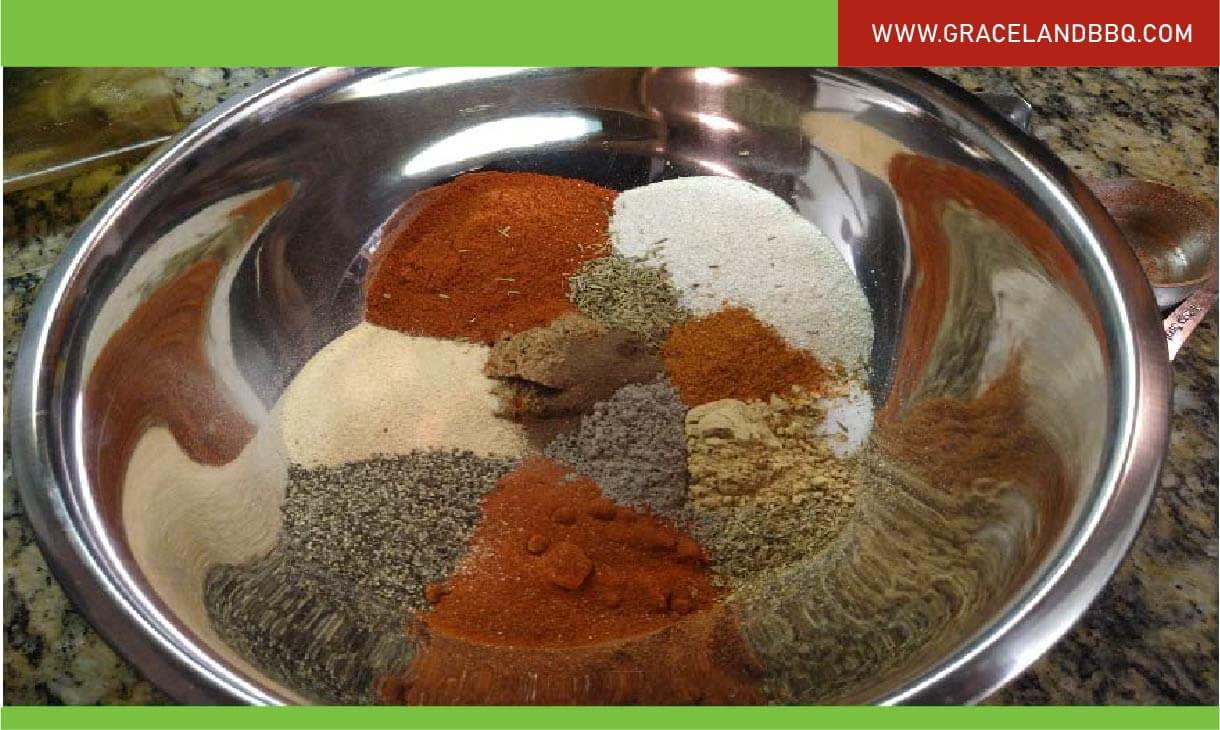 In a bowl, combine:

Use a whisk to begin blending, then glove up and break down any little clumps that are left. Apply generously to your ribs or shoulder, or any meat that you are going to smoke.

Visiting your favorite barbecue joint and ordering up their burnt ends and pieces is a great way to get an intense burst of their flavors. Not all places offer it, because it is usually off the briskets, and that means there is a very limited amount available. Sometimes it can even get too well done and not be as enjoyable as we might like. 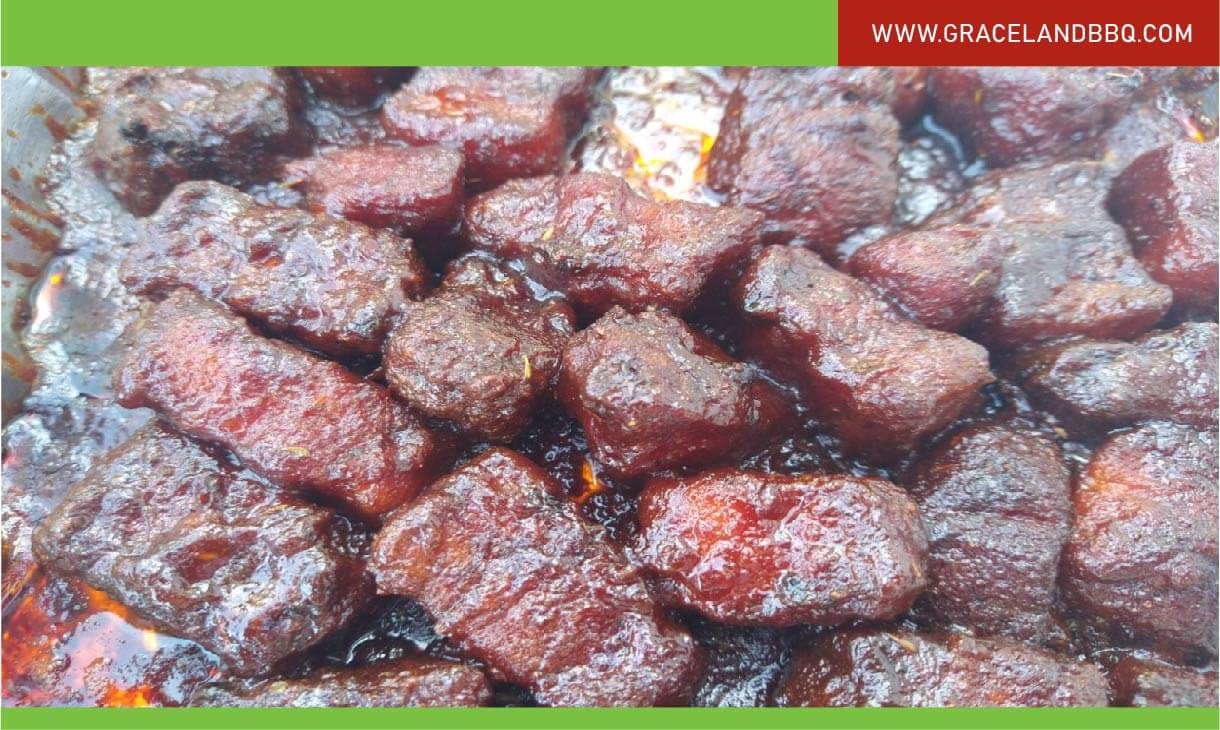 Enter smoked pork belly burnt ends and pieces. Pork Belly, from bacon on down, is a gift that keeps on giving. This variation is going to be one of the favorites among your guests and family. Even better, it shows how a rub and a barbecue sauce can be complimentary flavors when made to go together like our Memphis Rub and Memphis Barbecue sauce.

This is how you put it together. Preheat your smoker to 250 degrees. Cut into one inch cubes and put in a bowl;

Drizzle with, and stir until well coated;

Add and toss or mix by hand until coated;

It is somewhat easier to place the seasoned cubes on wire racks, and then place those on your smoker’s racks, although you can certainly place the cubes directly in the smoker.

Close and cook for 3 hours. Mix together in a bowl;

Pull the cubes from the smoker and toss in the sauce.

We recommend using a disposable aluminum pan for easy clean up. Cover with aluminum foil and place on smoker for 60 minutes. Remove the foil, stir, and continue cooking for another 30 minutes, or until a toothpick slides easily into the meat.

Serve as an appetizer, in a bun, on top of nachos, or just as a delicious rich meal. 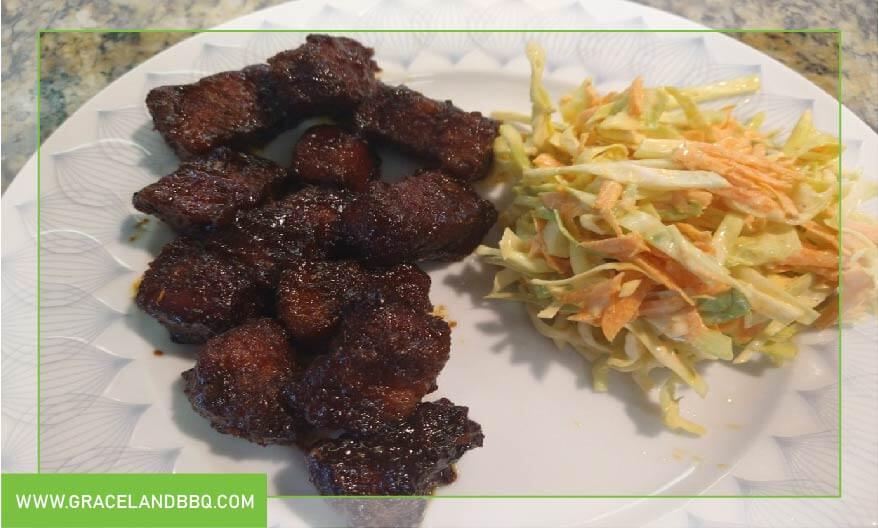 Create Your Own Rub

There are so many choices that you can include in your rub that it becomes overwhelming. Rather than open every single jar in your spice cabinet, after you have bought a few more, it was important to pick specific items for the flavor profile they bring to the table. As a core recipe this is a very good one.

But, you control your destiny. Drop the black pepper in favor of cayenne. Bring in dry mustard to underlie the BBQ sauce which also has mustard. Swap out cumin for the allspice and push the flavor a bit more southwest. Ground rosemary in place of the thyme will add aromatic aspects to your rub. There really is no rule book, so enjoy evolving your own caravan of spices to deliver flavor to your guests and family.

The BBQ Sauces of Memphis 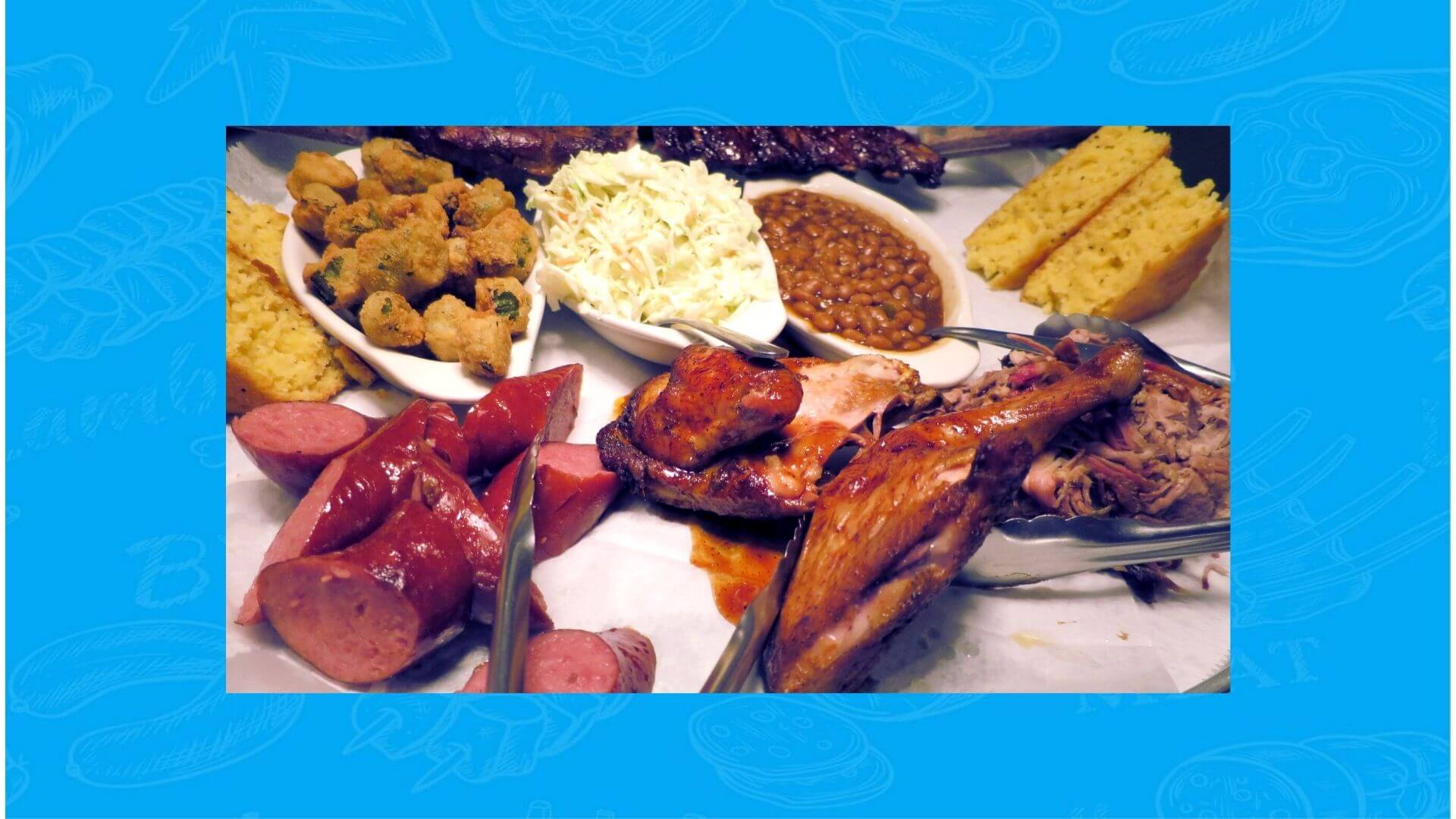 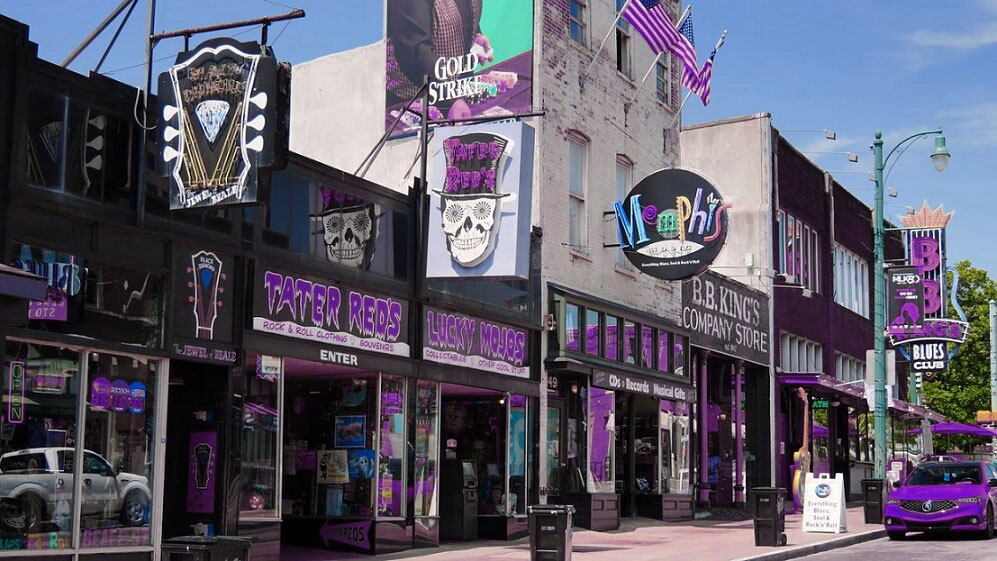 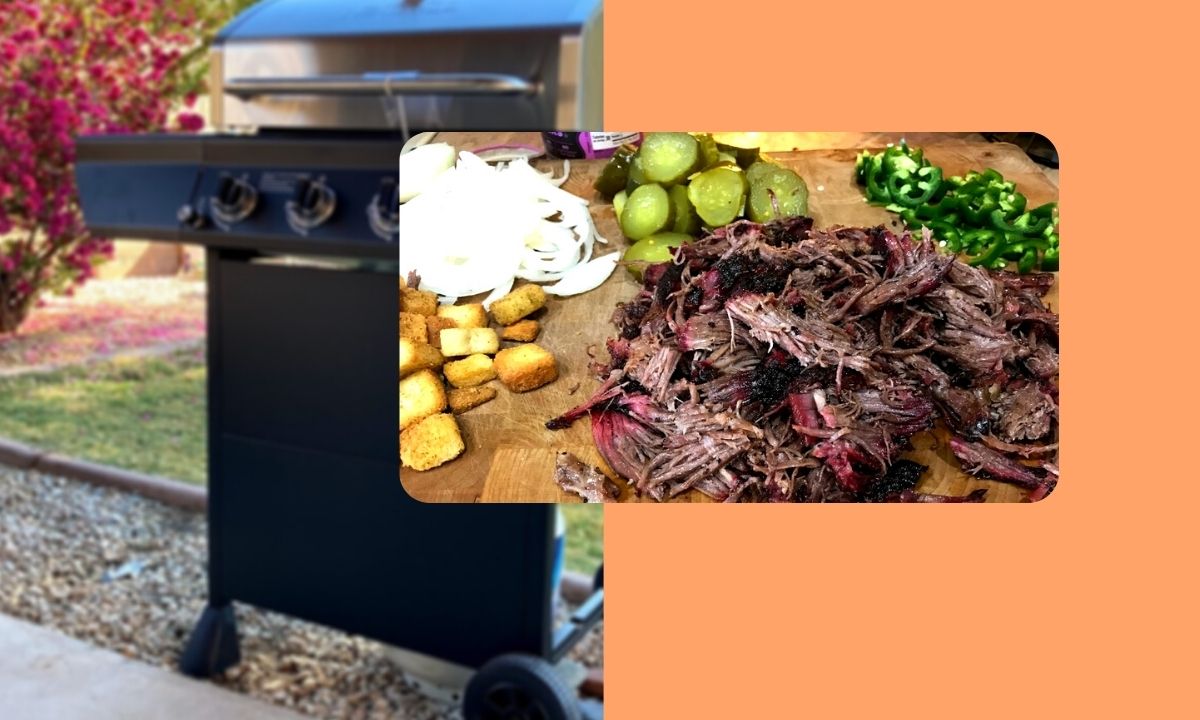